A couple of months ago my friend Nikki Botha had an interesting discussion on the state of politics in South Africa on her Facebook page. The talk was on whether individuals could influence any significant change to the political climate for themselves and society as a whole, or were helpless unless the collective society around them was in support of their efforts. Varying opinions were expressed; some suggesting solutions such as getting together to lobby and giving examples of societies that have done it before whilst others just complained about how bad things were. While some felt that emigrating was the answer, others felt there was no place like home. Optimists predicted glimmers of hope for the future and pessimists predicted doom. It was a fantastic dialogue!

My opinion was that we all have choices and in this one, we had two: a) Take personal responsibility for our lives by doing something to ease the discomfort caused by the political climate; or b) Continue to complain to all who care to listen including ourselves. Both options expend energy. The difference is one of them gets results and the other does not.

A few days later Nikki sent me a link to an article by Khaya Dlanga on News24.com which tackled the subject of race and economics. I thought highly of the article because it expressed a lot of what I was trying to say during the Facebook discussion. A previous blog post by the same author on race and economics sparked so much interest and emotion, prompting him to touch on the subject again in this particular article. Among other things, he advocated for personal responsibility in a society where it has often been abdicated in favour of a mentality of entitlement, finger pointing and blame-shifting. The following particularly struck a chord with me “We have to make things happen for ourselves, study, work and above all, make a way where there is none; that is what every celebrated captain of industry has done…Taking individual responsibility is the only thing that will end these divisions. Entitlement will widen them. South Africans, you are on your own. If we are to be a great nation we have to realize that the path to greatness is not achieved through excuses.”

This is the same with the state of our finances and practically anything else in life. We have choices. We can decide to do something to improve our finances or complain about them. We can take personal responsibility or shift blame onto our spouses, families, communities, the government, the economy, our skin color, our culture, our education level… you name it! There is never a shortage of excuses when you are looking for them. The difference is one gets results and the other does not.

In the last year my team and I have hosted monthly Financial  Management Workshops with a mission to educate and empower people to enrich themselves by developing healthy personal finance habits. This book is based on these workshops and will teach you simple, but highly effective, steps on how you can take control of your money and kick your finances into shape. I also share some of the common questions that are raised during the workshops, their answers as well as some real life stories from some of the people we have worked with.

This book is for you if you would like to exercise your choice to do something about improving your finances no matter where in the world you are.

I was honoured to be profiled in the Zambia Daily Mail on Thursday 13th March 2014. You can download a…

Xtraordinary Women is a company that is dedicated to empowering Women. They assist Women in finding their passion and creative power…. 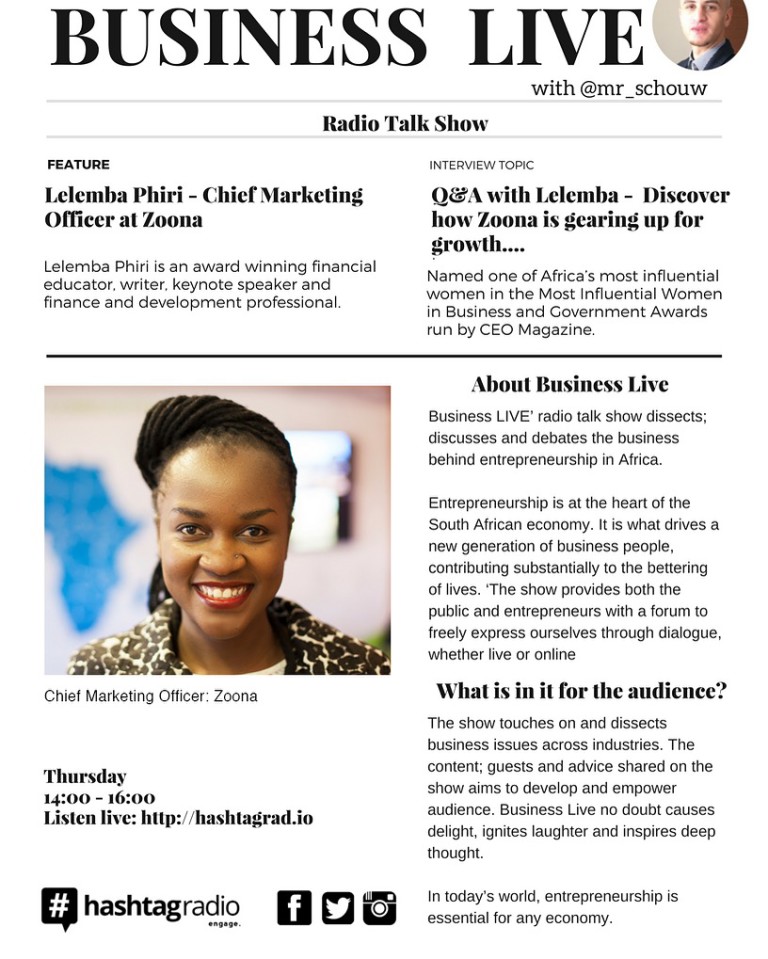 Had fun being interviewed by Mr Schouw on Hashtag Radio yesterday during the Business Live program. We touched on how…

Firstly, I would like say thank you very much for all the ‘money questions’ that you send in. I love…

I just love this time of year! It provides a much needed opportunity to review ones past year, reflect on what…